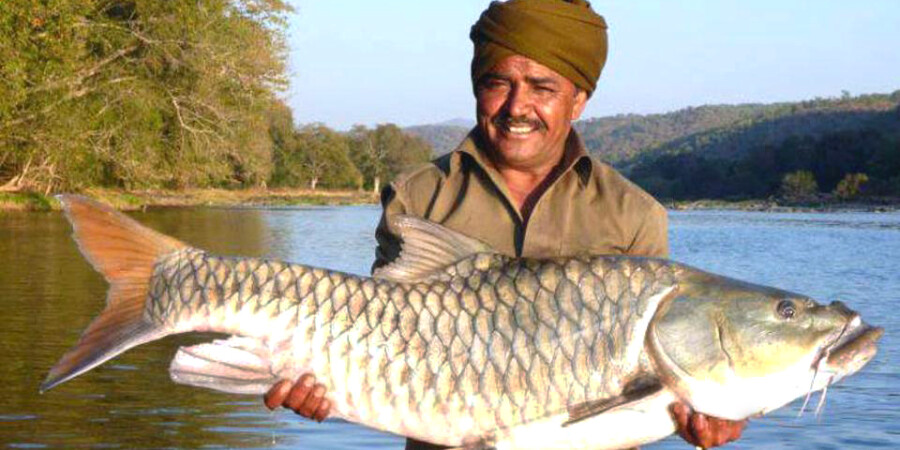 The Mahseer belongs to the genus Tor, of which there are several subspecies to be found in India and in other range countries in South Asia. There are issues regarding the taxonomy of the Mahseer and despite advances in molecular biology and tools for DNA analysis, scientists are not entirely in agreement as to how many sub species exist.

The Mahseer is a large cyprinid (belonging to the carp family) and is recognized by its large scales along the lateral line with two pairs of barbels. Males are identified by their long pectoral fins and have been known to reach a length of 2.7 m and weigh well over 100 lbs (though these sizes are rarely seen nowadays). The species is migratory; moving upstream during rains. It prefers clean, fast flowing and well oxygenated waters and has a much lower fecundity rate (lays less eggs per kg of body weight) than most carps. It requires gravel /sandy stream beds to breed and can migrate considerable distances in search of suitable breeding grounds. April to September is normally the spawning period but younger fish are known to spawn earlier. Mahseer are omnivorous. They have voracious appetites and their diet includes a wide range of algae, crustaceans, insects, frogs, other fish and also fruits that fall from trees etc. Apart from its cultural and religious significance (Mahseer are protected in ‘temple sanctuaries’ across India) these fish are a sportsman’s delight. They are very agile and strong, making them among the hardest fighting fresh water sport fish in the sub-continent. Hence recreational angling can generate considerable revenue for Mahseer conservation. The presence of Mahseer is an indicator of a healthy riverine eco- system and hence important as a flagship species. In Karnataka the locals refer to the Mahseer as ‘Bili Meenu’.

The Humpback Mahseer (Tor remadevii) in particular, is a charismatic fish species that is endemic to the Cauvery river, and is on the brink of extinction. It is recognised as one of the world’s top 20 freshwater megafauna and is popularly known as the "Tiger of the Cauvery river". The species is IUCN red listed and in immediate need of conservation. Our efforts have revealed only a few isolated populations remaining in the Cauvery river basin. This migratory fish is threatened by habitat manipulation, over harvesting and competition from other fish species.

It is only recently that scientific attention has been given to its taxonomy and ecology. Due to these efforts the fish has been given a formal description as Tor remadevii in 2018. The next steps are to develop a conservation strategy for the species over the entire Cauvery river basin (Karnataka, Tamil Nadu and Kerala) which requires a combined effort from multiple institutions.

Below are eight reasons why the Humpback Mahseer deserves special attention before it is lost forever.

1. The largest Mahseer on planet earth: The largest specimen recorded weighed 54 Kilograms and was photographed from the Cauvery River.

2. Endemic to the Cauvery river system: Historically the species has been exclusively distributed over the upper and middle Cauvery Basins and not found elsewhere.

3. Critically endangered: In 2019, the Humpback Mahseer population has been assessed and included as “Critically Endangered” in the IUCN Red List of threatened species.

4. Cultural history: In India, Mahseer have been considered sacred since the Vedic Period (1750-500 BC) and even today, Mahseer are protected and cared for in temple ponds.

6. Watershed management: The Humpback Mahseer an important bio-indicator for the health of the Cauvery river, a lifeline for the southern states.

7. International reputation: World over, the Humpback Mahseer is particularly famous amongst anglers, who consider it one of the finest fighting fish in the world.

8. A fish fit for Maharaja’s: Present at the Mysore Palace are trophy specimens of some of the record catches preserved by the famous taxidermists, the Van Ingen’s of Mysore.

The following sub species of Mahseer are generally recognized by scientists in India: (*Note:There is ongoing refinement around sub species classification under the "Tor" genus and this list is not final)

Mahseer populations have been declining in Indian rivers and morphology changes are observed as a result of several causative factors. These are (and not limited to) the following: